Tyranny Violates Agency: An LDS Perspective on the US. Constitution

A choice land and a free nation, the United States America is deeply intrinsic to the Church of Jesus Christ of Latter-day Saints. Many leaders of the LDS Church have been very clear on the correlation between the founding of the United States and the restoration of the Gospel some decades later. This correlation is even evidenced LDS scripture including the Book of Mormon (1 Nephi 13) and the Doctrine and Covenants (D&C 101:77, 80). Many leaders of the church see that the grand implementation and protection of liberty contained within the U.S. Constitution coincide with God’s will, and that ideas that run in contrary to those freedoms protected by constitution are not only legally unconscionable but contrary to divine law. “The Constitution is divinely inspired… [T]he great fundamentals must not be changed.” (J. Rueben Clark)

Agency, the freedom of choice, is in my opinion the most important power that exists in the universe. I also believe that free exercise of agency is synonymous with liberty and freedom. Agency is the power that allows a human being to act freely from their own conscience, meaning that inanimate objects may not act but can only be acted upon, and animate objects other than human beings, such as animals, may act, but not of their own free choice. Animals act on instinct alone. A dog does not decide to act like a dog. A dog is a dog by instinct. Whereas human beings may at any point decide to act in any way at any moment, even if it is contrary to their natural instinct. Thus we see that agency that is the power that separates God’s children from his other creations. Agency is the precious gift that is only shared with God. Individual liberty is not just a political luxury, but part of God’s plan for his children.

According to LDS belief, before this life two plans were proposed. “Shall the children of God have… agency to choose… or shall they be coerced and forced to be obedient? Christ and all who followed him stood for… freedom of choice; Satan stood for… coercion and force.” (Ezra Taft Benson) It is evident that Satan lost his proposition. Since that time, one of his major strategies has been to restrict the agency or liberty of men with the powers of earthly governments. For thousands of years Satan has used tyrants, despots, and monarchs to infringe on humanity’s sacred liberty. Totalitarianism reigned with only flickers of liberty arising only to be trampled once again by despotic regimes. It wasn’t until the 18th century that an enlightenment of thought prevailed over tyranny, and liberty was secured by the framers of the Constitution. The inspired portion of the Constitution consists of: The separation of powers in the three branches of government; the Bill of Rights; the division of powers between the states and the federal government; and the application of popular sovereignty, the rule of law and not of men. Some modern political philosophies consider these divinely inspired principles, “outmoded”. They are not. In fact they originate from the divine, and protect divine rights. Modern totalitarian forms of government (Communism, Fascism, and Socialism) that attempt to usurp the agency of man are in violation of constitution law and the sacred power of agency.
Agency, a key tenet of LDS religion is tantamount to freedom. Any force, party, or political system that attempts to infringe on the liberties guaranteed by the Constitution is not only violating the laws of the United States of America, but also acting in contrary to the will of God and the gospel of Jesus Christ. “No true Latter-day Saint and no true American can be a socialist or a communist or support programs leading in that direction. These evil philosophies are incompatible with Mormonism, the true gospel of Jesus Christ.” (Ezra Taft Benson) 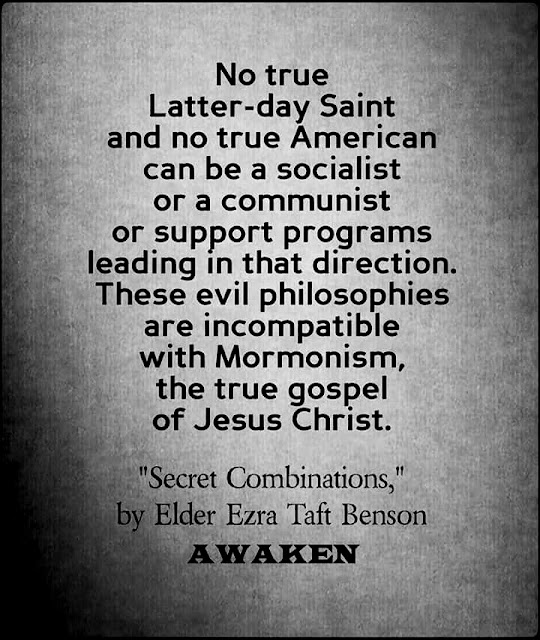