There are legitimate enemies to freedom. I have seen them and I have heard them. These are not the enemies you see featured in the news in far away desert lands. These are enemies closer to home. They do not dress in black and carry AK's. Instead, these enemies fight you in word, philosophy and in the voting booth. These enemies are seeking to take your freedom. If they cannot take your freedom they want your life. They may not own guns but they seek a monopoly on violence. They wield the mighty cudgel of government force and coercion. I seek to document these enemies so that their violence is exposed. Below is the enemy. Know them...

The above video shows Jordan B. Peterson, a tenured research and clinical PhD psychologist who currently teaches at the University of Toronto. He is being confronted by some students on account of his fight against the cultural cancer of political correctness. (See his speech that angered these students here: https://www.youtube.com/watch?v=-4R0bWC41g4) He is alarmed at how quickly it is metastasizing into laws that seek to punish any and all self-expression. Such legislation—in his case, Canada’s bill C-16, which would amend the Canadian Human Rights Code and Criminal Code to add “gender identity and expression” as a special category for anti-discrimination—is tailor-made to program people into conformity of thought. As with all things politically correct, such legislation always comes disguised in the language of “equality.”

The main complaint these Trans Activists have is the fact that Peterson doesn't see the need to force others to use 'preferred pronouns'. Preferred pronouns would be whatever words an individual selects that others must use when speaking to them (or about them). The new Canadian law would make it illegal to 'misgender', or use standard pronouns for, any trans person.

As Peterson correctly points out, pronouns are a closed linguistic category. This means, pronouns rarely if ever change. Pronouns almost never get added to. The only recent change is the decline of the use of the accusative 'whom', a vestige of the case system we once had in English. (Historical Corpora show that the use of 'whom' is steadily on the decline, and most people who use 'whom' don't actually know when to use it (Once again English has lost its case system).)

The only other recent change in pronouns was the loss of thee/thou (the second person singular formal pronouns). Which most people are familiar with due to their heavy use in the bible. So as you can see, pronouns are rarely added. In the last 500 years or more, we have only lost pronouns. Adding new words to this category (like ze, zim, zer, xe, hum, etc...) goes against everything we know about language. Any government led language planning should be resisted by all free men.

While we're at it, I may as well address the idea of problematic 'gendered pronouns' and other words. Grammatical gender has very little, almost nothing, to do with physical gender/sex. It just so happens that English has two grammatical genders (though we used to have three). There are some African languages with dozens. Now this may seem to prove the trans-activists dream of unlimited number of genders, but sadly for them, these have nothing to do with physical gender. They are just arbitrary categories of words (and sometimes the words for males and females end up in separate categories).

Throughout the video, the trans-activists state multiple times that Peterson must use their preferred pronouns or else he is oppressing them or harming them in some way. Towards the end of the video, one activist asks, "Who gives you the authority to decide what our pronouns are?" Somehow suggesting that Peterson is exerting some sort of control over their lives with his refusal to placate their demands on his speech. The question is then restated in its proper terms by the professor “Are you asking, Who gives me the authority to think and say what I choose?”

This question is truly a dangerous one. It is dangerous because the most basic aspect of freedom, is freedom of thought. It is the first freedom. It is the hardest freedom to deny someone… even if you throw someone in prison they could still think their own thoughts.

This is why freedom of speech is so important, because it is the most closely related to thought. As a man thinketh so is he. A thought first forms in the mind and then is translated into an utterance which then becomes an action. A man should be free to think, speak, and act as he pleases. If we allow speech to be regulated, we are in turn allowing our thoughts to be regulated. If our thoughts can be governed we have no freedom at all.

The harmful potential these trans-activist have is immense. The idea that speech can harm and therefore must be limited , is the most dangerous idea in recent history. Made even more dangerous by the fact that these trans-activists think they are protecting people from harm. They will protect us into bondage. Their demands of safety will imprison us all. 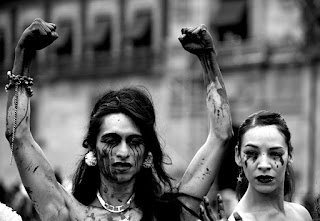